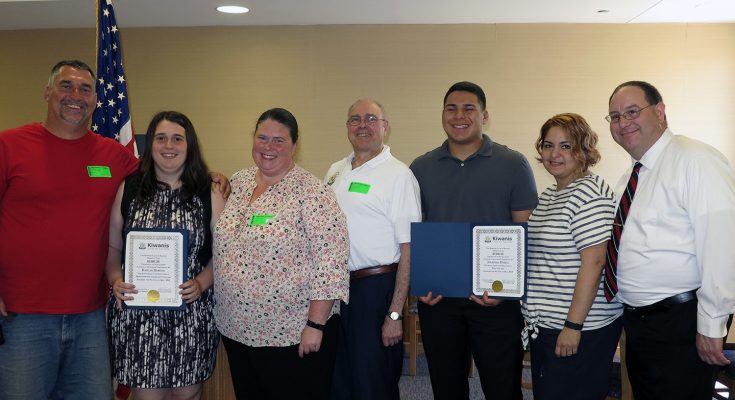 Today we held out meeting at Career Institute of Technology where we awarded 2 scholarships to students furthering their educational careers. President Bill opened a quick club meeting in the usual order and we held elections for our upcoming 2018-19 Kiwanis year. The floor was opened for nominations and since none were heard the secretary, who was travelling to and from Connecticut today , is going to be advised to cast a unanimous ballot for the following: President-Neil Gallagher; Pres-elect-Skip Fairchild; Vice-president-Janet Morgan; Treasurer-Gary Tempest; Secretary-Bill Walters; Immediate Past-president-Bill Walters and elected for 2-year terms on the Board of Directors: Walters Howell and Sara Panovec; continuing for one more year on the board are: Chris Paltz; Ruthann Arras; Joanne Cappellano. Next up was Ken Wildrick, President of our Foundation. 2 members were up for elections, Roger Conners and Victor Dennis. Again nominations were open from the floor and quickly closed since there were none and again the secretary of the Foundation was instructed to cast a unanimous ballot for both Roger and Vic. Joanne advise us there are about 70 Super Raffle tickets available and don’t forget the raffle is in 5 weeks. SELL. SELL. SELL. At this point we all enjoyed a fine lunch prepared by the culinary staff at C.I.T. After desert Walt Howell assumed the podium to award 2 scholarship. As Walt explained his Scholarship Committee consisting of Ruthann, Chris and Tom had some challenges determining who the 2 recipients were going to be due to some great student entries. This is a good thing! Walt explained this year again with our qualifying for a $500 scholarship matching grant from the PA Kiwanis Foundation Rose Sale we were again going to award 2 scholarships but this year our Kiwanis Club decided to increase the scholarships to $1500 for each student. Walt then called upon Jonathan Pineda, an Easton Area student, to receive his scholarship award. Jonathan is going on to Penn College of Technology where he will continue to study various forms of the construction trade. Next Kaitlyn Horton came forward to receive her scholarship award. Kaitlyn is a Wilson High student who plans to continue education starting at Northampton Community College in the engineering field and has plans to move forward to a 4-year school. Closing the program was Eric Kahler, C.I.T. Director, who thanked our Kiwanis for continuing to believe in and support students who are interested in the various “trades” and provided us some insight in the forward-looking needs of the Lehigh Valley. It is estimated that there could possibly be a 10,000-person labor shortage in the many trades necessary as growth continues strong in the Valley and C.I.T. will continue to fill-in the gap with the students arriving each year from the 5-sending school districts that makeup the Career Institute of Technology.