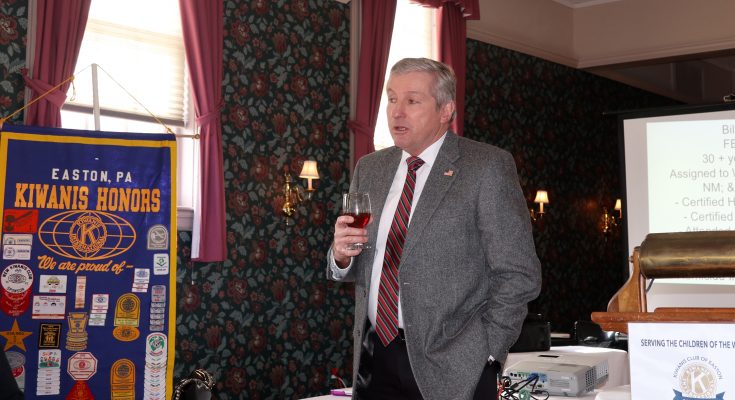 GREAT TURN OUT TODAY. Our members and an interclub from Palmer Kiwanis. James Owen brought a “guest” today known to many of us: Barry Miles, himself a former part-time Kiwanian from the Outer Banks. And if James & Janet continue to do their magic, maybe, just maybe he can be persuaded to join us. Walter Howell was missing today as he was taking “driver training”: you can ask him when you see him if he passed. Palmer Kiwanis Pres. Vic Sciomillio introduced from their club, Ernie Hoeflein-permanent club secretary, Jim Woodley, Bob Pretopapa and our speaker, Bill Tonkin. 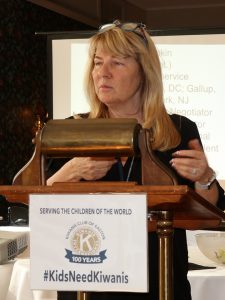 Janet advises us of 2 “Road Trips” in coming months: Feb 20thwe will be at THE EASTON HOME (who knows, maybe some of you will plan to “stay” once you see it), and in March we will venture down to Riegelsville for lunch at the Someday Café & Roastery and then take a tour of the Conservation Warehouse led by our own John Kennedy. Janet then introduced someone known to those of us on the Opioid Task Force, Bill Tonkin. Bill retired from the FBI with 30+ years; working in several states during his career with multiple job titles, but today we learned about the “Center for the Analysis of Violent Crime (Behavioral Profiling)”. Bill presented a study of “Pre-attack Behaviors of Active Shooters in the US (2000-2013).” Bill referred to lyrics from an old song from the Buffalo Springfield era: “Somethings happening here, what it is ain’t exactly clear.” As Bill says “it kinda fits today’s society.” There were 160 active-shooter events during that 2000-2013-time frame. Active-shooter excludes personal, family, gang shootings and concentrated on the “public” shootings.  One thing is for sure: active-shooter situations are “here to stay” only we don’t know when the next one will happen. It’s the new NORM! The FBI Behavioral Unit did an in-depth study of 63 of those shootings. Facts: majority of active-shooters acquired the guns legally; they planned in advance-never spontaneous; there were various forms of “stressors” brought on by just about everything that bothers individuals; only 6% were women; some even held high degrees of learning including a PHD. Another quote from Bill: “Not all threats are created equal.” Threats need to be taken in context. He recommended a local author who has published what he refers to as a “bible” about shooters written by Dr. Peter Langmen, School Shooters: Understanding High School, College, and Adult Perpetrators. What we do know is some of the problems do originate in Hollywood. Just watch the YouTube video: The Basketball Diaries – School Shooting Scene. But the scariest comment from Bill is that “kids are at risk in EVERY school.”