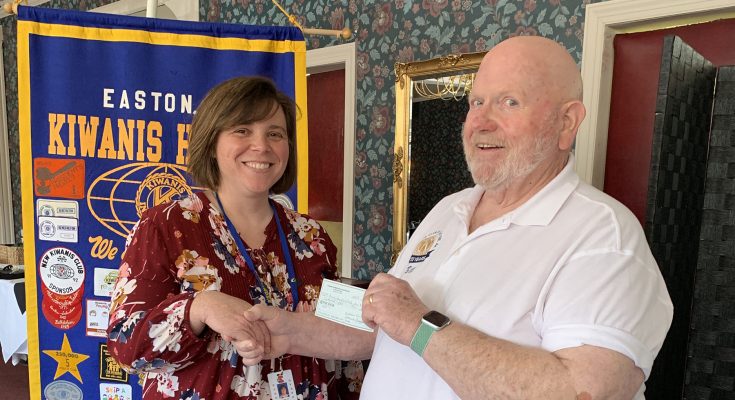 Our meeting was opened with the ringing of the bell by Immediate Past PresidentBill since our president and president-elect were both absent. We were a small group of 12 plus 1 guest, so we had to “fork” over for 3 no-shows to meet our minimum of 15.  We were informed of the passing of a long-time member, Jim Masterson on March 21 in Florida.  Our sympathies go out to his family; he will be missed.  Bill passed around an envelope with PA District Kiwanis Kash tickets to sell.  Our district copied our “Super Raffle” as a fund raiser but only sell their tickets for $20 with a percentage of the amount sold given as first and second prizes. Half of the proceeds go to the District. Bill then called Barb up to present the Distinguished Club banner patch,

and presented her with the Distinguished Secretary pin and she in turn presented him with his Distinguished President pin. These were given out at mid-winter conference the other weekend at Penn State. Bill then called up our guest, Carolyn Serva from Family Connections for the presentation of a $250 check.  Family Connections provides support for families in the Easton School district with basic school supplies, backpack pals, academic support to the students, barbershop book program, stuff-the-bus program, as well as food pantry services for families in the district.  Janet gave out tickets for our Pancake Breakfast at Applebee’s on May 4.  Please support this fund-raiser by purchasing or selling your tickets!  Joanne has YOUR Super Raffle tickets!  Be sure to get yours soon – it could be a big winner!  The cost for lunch this year will be $15 and will include a dessert!