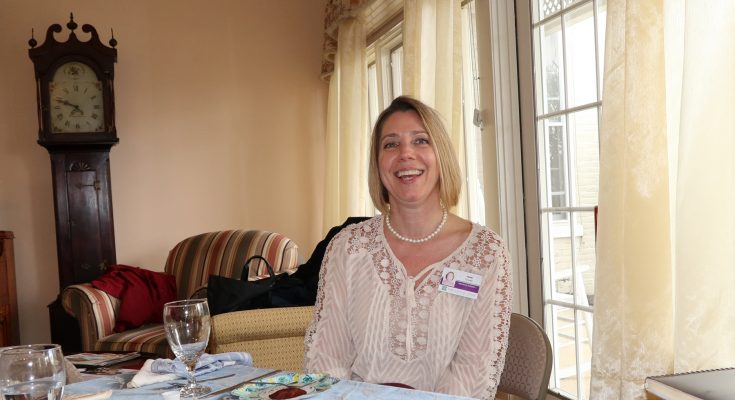 We were on a ROAD TRIP again today. We LIKE ROAD TRIPS. Always different settings and different food possibilities. But more on that later. Joanne reports she only has 40 Super Raffle Tickets left (and Bill reported that he and Barb had 28 or their 29 tickets committed already). Janet reminds us of the upcoming Flapjack Fundraiser on May 4th at Applebees: sell or buy those tickets and you can buy and donate them to the Boys & Girls Club. Walt said there are a couple more chances to interact with our Sponsored Youth Clubs remaining this year. Also, Walt and the Scholarship Committee were meeting later today to decide on the 2 $1500 CIT Scholarships we’re presenting on May 8that CIT (yea, another ROAD TRIP).  Ken reminds us the Foundation will meet next Wednesday after the luncheon. Today we had our luncheon at THE EASTON HOME. At one time it was known as the Home for Aged and Infirmed Women, which also then carried the moniker of The Old Ladies Home. I think today’s name for it is more appropriate. Peggy Castronova, Sales Director and Heidi Groner, Marketing Assistant, both company members of our Kiwanis Club presented our luncheon today courtesy of THE EASTON HOME. Heidi gave us a brief history of the home. In 1890 several downtown churches decided they had to do something for the elderly widowed and single women in Easton thus began the operation and charter. In 1893 they relocated to the present location at 1022 Northampton St which has grown over the many years into the wonderful facility it is now. Many old antiques adorn the facility. In 1989 the name was changed to THE EASTON HOME as they began to accept men but it was not until 1996 that the first male began living there, with his wife. In 1993 the operation was turned over the Presbyterian Senior Living Community, that also owns 2 other facilities in the Lehigh Valley. They are especially noted for their approach to their “memory facility.” They pride themselves on reminiscence therapy whereby with the visual approach to make the area look like the era our grandparents lived in. They even have an old-time kitchen with icebox and old stove and washing machine (all non-working) to help create the nostalgia feeling. Groups and families even have meals served in the old-fashioned setting, all part of the reminiscence therapy. There are about 55 staff personnel to handle the 53 residence rooms. The rooms all have a private toilet area and showers/tubs are in a more controlled setting to be mindful of slip-fall hazards. Rooms are private unless a couple are sharing one. Three meals per day are served with several food choices. Rooms and services are billed on a daily basis and while you will need to financially qualify, once you are a resident you eventually will receive benevolent care when your money is exhausted. There are 2 100+ year old residents and several in their late 90’s. After our lunch and meeting some of our members went on a tour. I’m thinking they were looking for that perfect location for their future home.