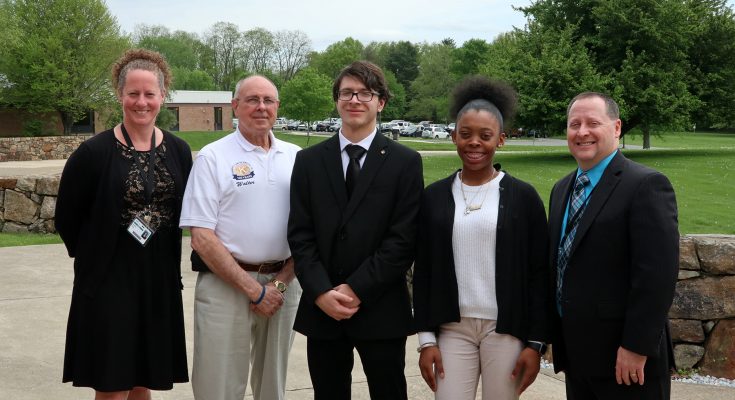 Today our ROAD TRIP to CIT had a nice turnout for the Annual Scholarship Lunch. Thanks to Janet we had a successful Flapjack Fundraiser adding over $700 net to our Service Project Fund while about a dozen or so youth from our SLP Clubs at Easton schools were the servers. Joanne reports only 7 Super Raffle tickets are left to sell for the June 12thevent. Bill read a quick request from Gov. Phil about considering a consolidation of Div. 17 and 18 into one division. We will discuss at one of the upcoming meetings. Several of us will have a meeting with Mayor Sal Panto at his office on Friday to discuss the City’s $50,000 commitment to our 100thAnniversary project from last year. Walt reported that the SLP clubs are holding final meetings in the coming week. Walt also thanked CIT for preparing a wonderful meal and thanks also to the scholarship committee that he chairs: Ruthann Arras, Christ Paltz, Tom Malerba & Ken Wildrick. There were 6 worthy candidates competing for the 2 $1500 scholarships. And this year and they had a tough time reducing it to the final 2.

Walt first introduced ALAYSIA CAMPOS who will be graduating from Easton High School and will continue her Early Education Career at Alvernia University. Next Walt introduced Nathaniel Kober who will graduate from Wilson High School and will continue his career at Moravian College in Physics with interests in Space, Electronics and Engineering. Next on the agenda was CIT’s Student Counselor Jennifer Russ, who reported to us that enrollment next year at CIT is expected to be 728 students, a 10% increase. Then CIT Supervisor of Curriculum, Eric Kahler told us that over half of the CIT graduates go to post-secondary education. He explained about the shortage in skilled workforce here in the Lehigh Valley and across the nation. There are record lows in unemployment and locally it’s at a 43-year low. Currently 35 students are enrolled in the work co-op programs spending their days working in the field and only attending one day a week in the classroom. CIT has 18 different programs with 9 of them already fully enrolled for next school year. There is currently a large deficit in machinists as locally the average age is around 54 and there are not ample young persons to fill the gap as employees age-out of their jobs. The largest Local company hiring machinists is B Braun for the medical industry. And CIT is only one of a handful of technical schools actually building a home with their students for sale to the public.