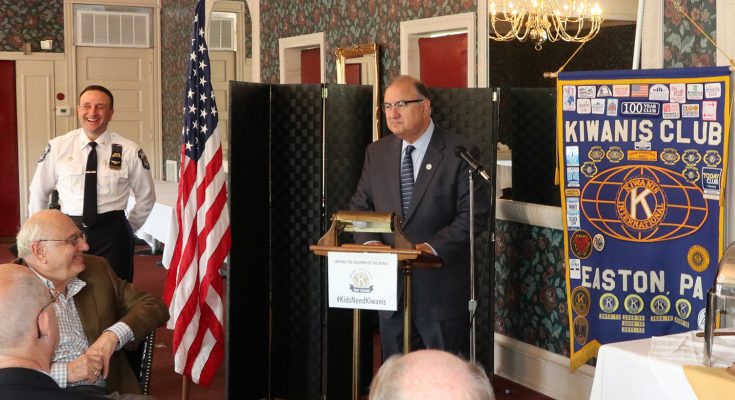 Today the “safest place in the city” was at our Kiwanis Meeting. But before I explain why, some Easton Kiwanis meeting information. Next week we will have election of officers for the club and the foundation and we will discuss and vote on merging the 3 Div. 18 clubs into Division 17 which would take us from 6 clubs to 9 in our division. Janet reported that with the final monies received our Applebee’s Flapjack event netted over $800 for our Service Projects. And Joanne reports that she only has 2 Super Raffle tickets left for the June 12thevent. Janet reports also the Easton Opioid Awareness Task Force will be at the Rally-In-The-Valley at Steel Stacks this coming Sunday.Joining us for lunch today was PA Kiwanis Gov. Phil Weber from Emmaus who brought us greetings from both PA Kiwanis and Kiwanis International, thanking us for the amazing things we do especially honoring the men and women who every day protect us all. And we thank the Easton Police Chaplin for today’s invocation on this very special day for law enforcement officers, May 15th. Walt then began the awards portion of today’s meeting and reminded us that it was Pres. John Kennedy who declared in 1961 that May 15th would be known as PEACE OFFICERS DAYand the week it falls within is NATIONAL POLICE WEEK. And later during the ceremony Chief Scalzo reminded us that Easton Kiwanis has been presenting the POLICE OFFICER OF THE YEAR award since 1981. But Walt switched gears and called a former Easton police officer to the podium. Retired officer Anthony “Cappy” Cappellano and his wife lost their home and all its possessions this past year to a fire. And since Cappy himself once received the Kiwanis Police Officer of the Year Award, Walt procured another “resolution” from City Council and another wall plaque like we provide to the awardee each year. Cappy was sure surprised to be called forward as he thought he was at today’s meeting to pick up his Super Raffle Ticket from his sister-in-law, Joanne Cappellano. SURPRISE CAPPY!

Back to the other “main event” for today with Easton Police Chief Carl Scalzo providing some background on Detective Jamie Luise, the 2018-19 award recipient. Jamie was an Easton High graduate, and when he started with the Easton Police Department in 2010, he told Chief Scalzo how confident he was starting as an officer. The Chief thanked Jamie’s family for all the time he is away from home and doing his job to make Easton a safer city. The Chief thanked him from “one Italian to another.” Mayor Sal Panto joined in the praise and was expressly happy to have another “Italian on the force with the chief.” And then Jamie himself got his turn to talk about his career and family. He told us how coming home every day safely to his wife and 4 children is a top priority in his life and he gave thanks to the Easton Police Department for “giving him a badge and a gun.” He thanked his many fellow officers and supervisors who voted to award him this honor and many were in the room today. “Its’s an individual award but we’re a team organization.”