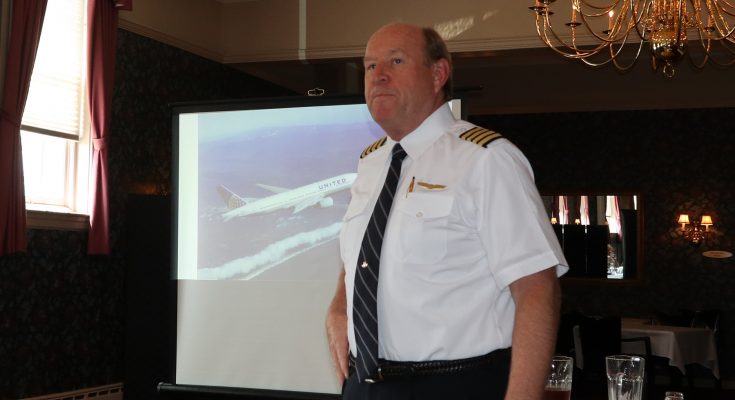 While Pres. Neil was returning from across the state, incoming and past president Skip took charge of today’s meeting. Joanne feels all tickets are SOLD since no one that still has tickets has said anything to the contrary. So next Wednesday is the big Super Raffle Day. Reminder: we will NOT be meeting on Jun 26thor July 3rd. So today we welcomed 3 guests that Janet & James brought along: Dave & Diane are super neighbors and “dog sitters” when J&J are away on trips (which is quite often, at least that is what doggie Emma told me) and another neighbor Kurt. They all wanted to know more about their neighbor known as Captain James. So Janet got to introduce her recent husband and long-time friend from high school, James Owen. James has known Janet since they were 14 and in high school in Leadville, CO. James is from a military family and moved around a lot, all over the world. James is a bit of a perfectionist and is always positive about his life. When his father left the Air Force they retired to Leadville and opened a Western Auto store. He and Janet met in 10thgrade but after they graduated she went into the Navy and James kind of bounced around. He went to college for a while and then became a miner in Colorado. Never really sure of what he really wanted from life he remembered his grandmother saying, “You can do anything you want to if you set your mind to it.” So he took it to heart and decided to be a fighter pilot. Got back into college and the Air Force and flew T38 fighter and then was assigned to be a Forward Air Controller at Shaw AF Base in Sumter, SC. Then when he went looking for a civilian flying job he had to start at the bottom. In Rock Springs, WY he was flying charter deliveries for UPS. Then a 19-seat commercial local airline out of Denver, CO up into the mountains. Next he spent some time in Japan flying for Nipon Airlines doing island hopping to Guam in the southwest Pacific and into Honolulu. Like he said, “tough job but someone had to do it.” He worked his way into Continental Airlines, now United, and while living in Colorado his “home base work office” was Newark, NJ. Eventually the “commute” got to him and he relocated to the Lehigh Valley. And then reconnected with Janet after some 45-years of “separation” and the rest is history for them. He now pilots the Boeing 777: “Triple 7” as it’s called. His philosophy is all about the “quality of life decisions” being his priority. And back in 1997 he began to become interested in riding motorcycles. He’s a 2 time-winner of the very grueling endurance ride called the Iron Butt Rally. It’s like over 10,000 miles in 10+ days. Riding and scoring points along the way. He is preparing his BMW for his next, and defending “champ” Iron Butt which begins very soon. So is James actually Captain James or Iron Butt James. I guess the answer is “up in the air” which is where he is quite often.

Is this the first “motorcycle” James rode?