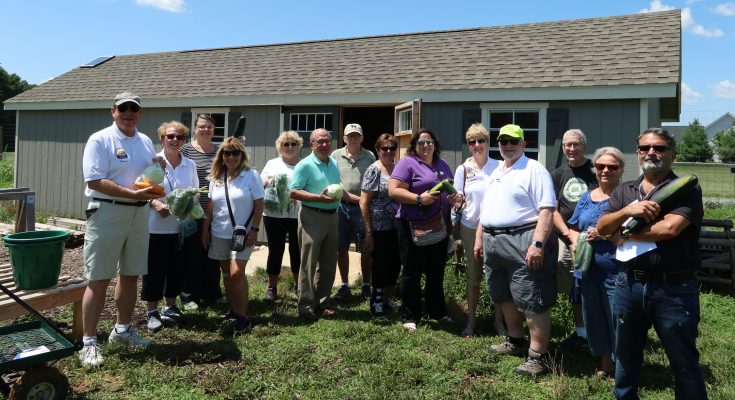 We love a road trip and today was no exception. We met early, most of us, at The Monocacy Farm Project. It is a 10-acre organic, demonstration and production farm in Bethlehem, PA on land owned by the School Sisters of St. Francis on Bridle Path Road. The concept was begun in 2013 to utilize landed and resources in the Franciscan tradition modeling stewardship and care of the earth, foster community involvement, provide educational opportunities and serve the needs of the poor. Our tour guide, Bob Drake and his volunteer assistant Meghan explained how the original working farm was owned by a Bethlehem Steel executive and had one of the largest barns in PA. It was cattle and crops. In 1947 the School Sisters purchase it and added buildings, continued to utilize the land for farming and even created a high school for girls which ended in the late 1980s but the school facility has been in continuous use and will soon open as KOLBE ACADEMY, the first faith-based recovery high school in the nation. About 6 years ago they sold 21 acres of the farm and a 55+ residential community was built next to the farming side of the property. When Bob took over the farm he was still learning as his background was in education but he spent time in foreign lands learning about how to take poor soil and create useable crops. So at Monocacy Farm he had to deep till the land, about 4’ deep and turn over the long-compacted soil and then add organic topsoil from Rodale organic. It took 3 years to grow any beginning crop, of clover. Now they utilize wood chips and horse manure, from a local farm, mixed and eventually placed in a thin layer over the planting beds. It’s all organic. No chemicals or man-made insecticides. They even procured a well for watering the crops but per code they have to wash the veggies with city water.

They have a greenhouse to start all the crops over the colder season and they even lease a part of the greenhouse and the income covers much of the utility costs. There is a plan to install solar panels on the utility building to further utilize natural resources. Each year in the beginning as they prepare the soil for planting they utilize a machine that mounds the soil into rows, adds a thin plastic water drip-line and then overcovers with dark plastic which helps with warming the soil and young plants and keeps the weeds to a minimum.

They offer private rental garden plots and they offer a “Pick Your Own” membership for $10/year. The cost of the veggies is very reasonable. The excess crops are now being supplied to 12 social agencies in the Lehigh Valley for the various food banks and some local corner stores buy the produce at wholesale prices for sale then to their neighbors.

After our farm introduction we travelled over to the Sister’s Retreat House for a well-prepared light lunch utilizing some of the fresh veggies. Joining us for lunch was Brooke Tesche, Chancellor of Education for the Allentown Diocese. Brooke is Kolbe’s “brainchild” as herself an educator for many years in various locations around the country she saw the need with the rising substance abuse and addiction issues with students but no place to properly provide their education. Hence her idea of what has become Kolbe Academy. We held a short meeting and welcomed, in Easton Kiwanis fashion with song, Priscilla and Rett Oren, neighbors who Barb & Bill invited along. The Monocacy Farm happens to adjoin the location where Barb & Bill and the Oren’s live.

From there a few of us ventured across the parking lot to the new, and soon to be opened, KOLBE ACADEMY. We had a behind-the scenes tour of the still-being-painted rooms but did meet one of the teachers whose room is already prepared and she has been there preparing “her room”, as any teacher would for the students who will arrive on opening day, August 26th.