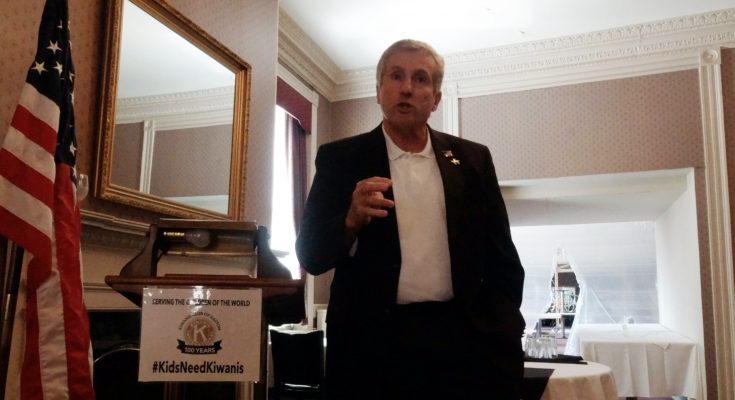 Pres-elect Skip opened the meeting today, the 18thanniversary of 9/11, with a moment of silence for all those who died on that day and all the first responders we have lost as a result of it. Neil is still “on his back” and waiting for an MRI on his back.  Bill told us that Ruthann Arras will not be renewing her membership at this time due to full-time activities related to caring for her mother and other duties. Barb gave an update on last Saturdays Miracle League with Easton Kiwanians in the snack-bar. 6 members including one we have not seen much of, Al Rutherford. And we expect to be working the refreshment stand again on Oct. 12th, the last day of fall ball. And on Sat. Oct 19thwe will be helping at the Miracle League’s Halloween Event. More news to follow on that. Barb reminds us of the cut off for Rose Sale orders is Wednesday Sept. 25th. Nick reminds us this weekend the Easton Opioid Awareness Task Force will be at the Forks Community Days and on Monday the 16that 6PM the EOATF will have a general open-to-all meeting at the Boys & Girls Club. We welcomed Nancy Shaul, a visitor all the way from Nanticoke, PA. Nancy is an active supporting member of the EOATF representing the Pocono Mountain Recovery Center.  A reminder that next week we have the curator from the Sigal Museum who will explain about a new permanent exhibit coming soon. Bill Walters got to introduce Bill Tonkin. Bill is a Palmer Kiwanian, a retired FBI Agent, co-chair of the EOATF and just “a really good guy.” Bill was an FBI agent assigned to work Newark Airport as an FBI liaison and was on his way from Easton to Newark on the morning of 9/11, 2001. Bill began to explain what he experienced hearing on the Don Imus radio talk show he was listening to on his way in. His life changed rapidly that fateful morning. He has stories and moments that will be with him for his whole life. The FBI was able to retrieve many private phone conversations from persons on the United Flight 93 as their plane was being hijacked after a delay leaving from Newark that morning. These passengers were civilian heroes by overtaking the hijackers and diverting the plane into a crash in an open field in western PA. rather than into a building in Washington, DC where the FBI feels it was heading. Bill paints us a picture of numbers: 2400 were killed at D-Day at Pearl Harbor but 2600 lost their lives on 9/11 immediately and over the past 18 years 4400 have been killed in Iraq and 2900 in Afghanistan and since 9/11 over 2000 first responders have died from effects of breathing in all those toxic gasses that day. And it is known that currently over 10,000 are currently affected with problems related to the recovery and cleanup of 9/11. But yet at a press conference during the cleanup NJ Gov. Christie Whitman made a public statement that the “air was clean.” Bill agrees that there was no direct concrete evidence about the plan to hijack airplanes and fly them into buildings. But there were multiple Federal and State agencies, each with some pieces of information, but due to the “stovepiping” of these agencies, knowledge they had were not allowed or encouraged to share from one agency to the other. He tells the story of a gate agent who was collecting the boarding passes, tearing them in half and depositing the stubs in a waste basket at the gate. Keep in mind back then you still needed a paper boarding pass. Immediately once he knew what had happened he had the sense of mind to retrieve the waste basket and turn it over to the FBI. Now they had all the “names” used to purchase the tickets and even fingerprints of all those who boarded the “fateful flight 93.” But back then there were no security cameras at every corner. So, no photos exist of those terrorists. Bill tells us of what is currently happening in our country with unchecked borders. Undocumented people are crossing in at alarming rates and it is a known fact some of them are planning on continuing jihad in our country. Consider a recently elected member of Congress, who is of the Muslim faith, at a fund raiser said while referring to 9/11 “… some people did something and that all of us were starting to lose access to our civil liberties.” Bill further comments there will be more “active shooter” incidents and probably they will begin to follow the scenarios that have taken place in Europe: multiple shooters, in multiple locations on the same day. The jihads are here and they are not going away. They will trade on paranoia. His best advice to us all: look around as you travel and walk. Don’t have your head focused on your hand-held cell phone. Be an owl: have that 270-degree swivel to your head and stay aware of your surroundings and who and what you see. If you see something, say something. In closing he hopes we can all someday return to the September 10thmentality and quoting from someone he said “The further we get away from September 11th the closer we can get to September 10th.”