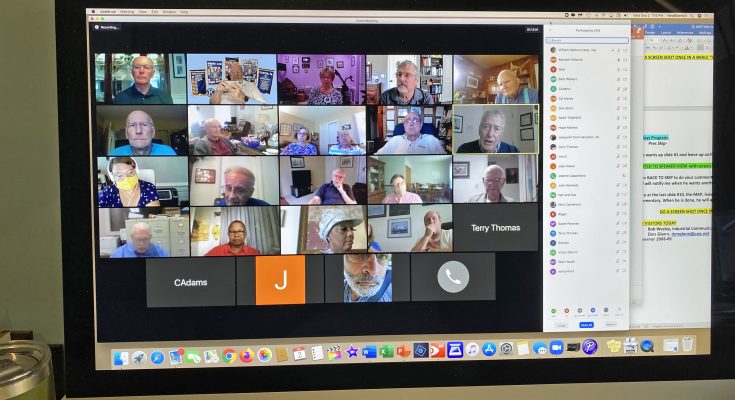 Wow, one of our biggest turnouts I think for a Zoom meeting. We had 19 club members and 7 visitors joining us today. We began todays video messages with the PLEDGE OF ALLEGIANCE with a bit different version done by Evangelo Morris who delivered Old Glory in front of an energized crowd at the Reagan Round Up in Wilmington, NC some years ago and then GOD BLESS THE USA featuring Lee Greenwood, Home Free and The Singing Sergeants. Both were done to begin putting everyone in the proper attitude to hopefully learn and understand the message they were about to see and hear from our President, Skip Fairchild. Skip welcomed all the visiting Kiwanians and asked each person on Zoom who may have been in the military to introduce themselves and their service they provided to our country. Bill listed the upcoming programs as: Sept 9, “Famous People Players” from Montreal; Sept 16 Ken Wildrick: Tip of a Continent; Sept 23 Ken Wildrick: “Falls that Smokes”; Sept 30 our first face-face meeting with Installation & Board Meeting to be held at the Boys & Girls Club (more details will follow prior to the meeting). 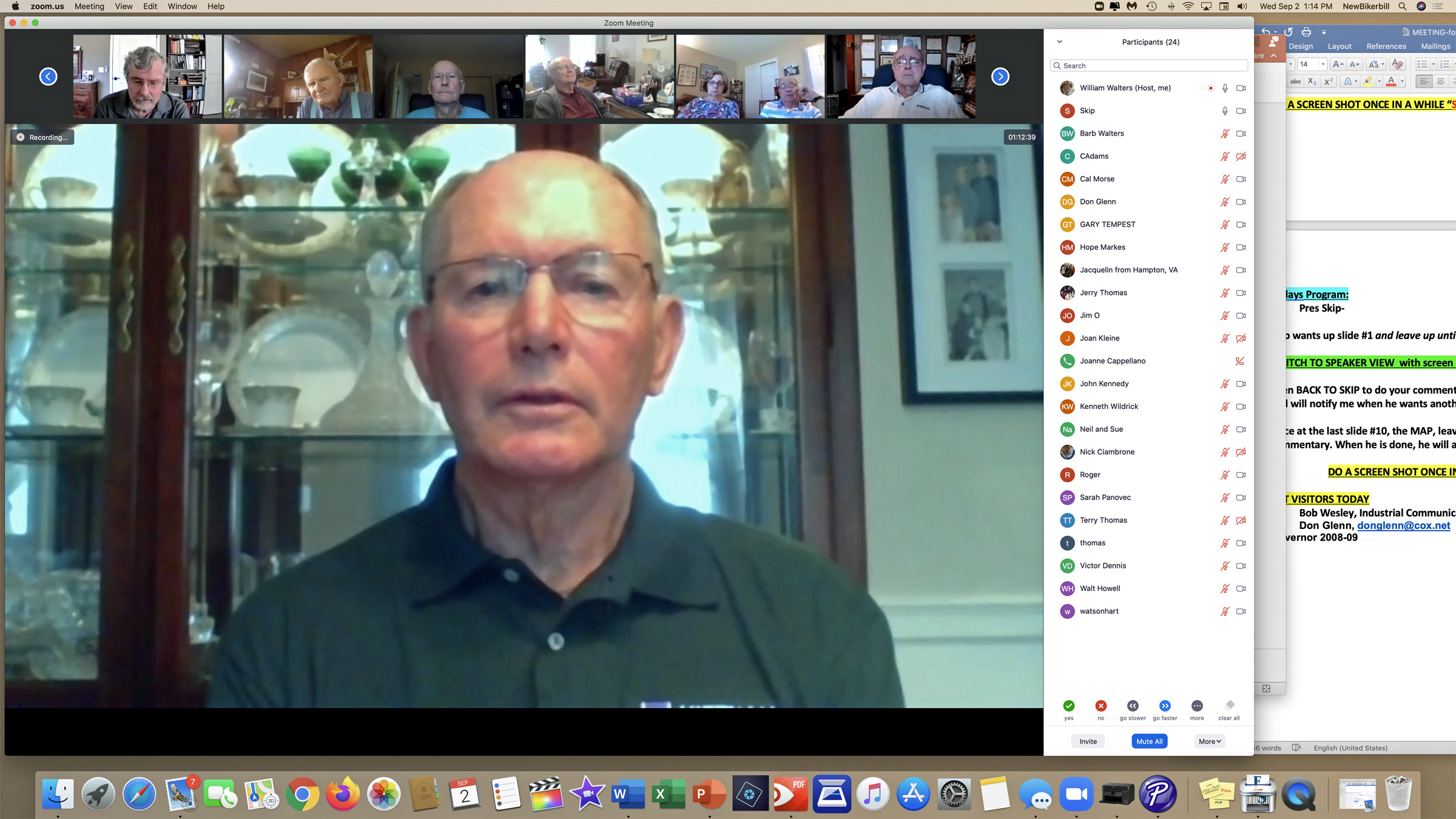 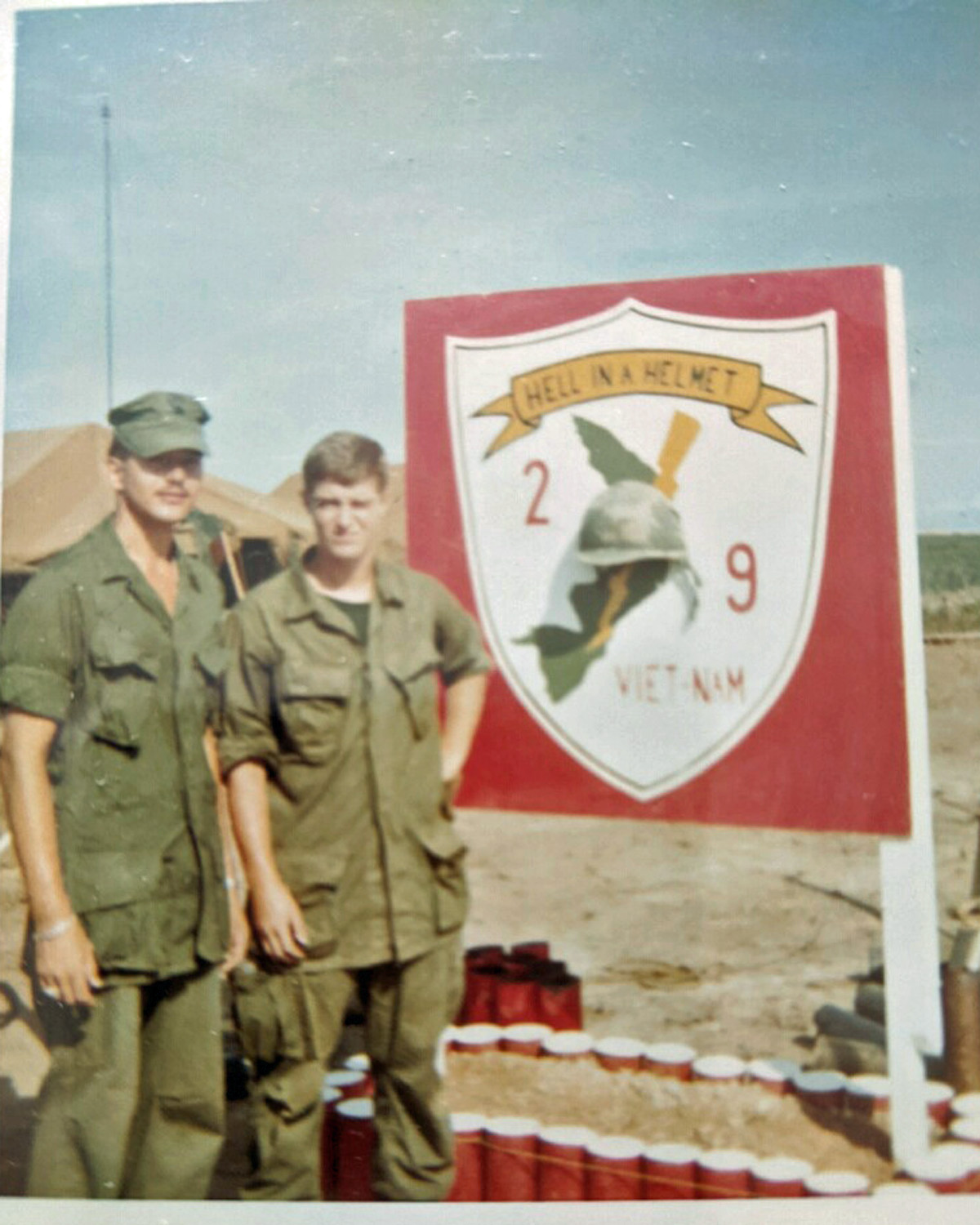 Next, Skip began his verbal and PowerPoint presentation entitled, “A Year in the Life of a Combat Marine” in Vietnam 1967-1968. Skip enlisted and chose the Marines as he felt they had the best training. We heard from Skip his first-hand experiences from some 53 years ago. Chilling statistics and numbers of casualties in the Vietnam War. (Britannica.com lists the Vietnam War, (1954–75), a protracted conflict that pitted the communist government of North Vietnam and its allies in South Vietnam, known as the Viet Cong, against the government of South Vietnam and its principal ally, the United States.) Skip related that by the end of the war 1587 American soldiers went Missing-In-Action; 767 were Prisoners-Of-War; 977 died on their first day in Nam; 1448 died on their last day in Nam. Skip ended up as a “rifleman” and a Squad Platoon Leader. They carried sometimes as much as 110-pounds of gear. In the summer temperatures ranged during the daytime from 90-100 and at night 70, which was actually a bit cool considering the daytime temps. During the Monsoon season 60” of rain would fall. Young children were friendly and always hanging around trying to sell soda and cigarettes and were friendly, during the day, but you had to worry about them at night because they might try to kill you. The patrols from base camp into surrounding territory were always short and may only last a day or so while securing a section of the territory. “Body count” was most important; not who won the battle. Skip recounted his experience on one patrol. As he was moving forward with the Marines, he heard a command: Stop-Freeze. Being a Marine he knows to take orders seriously and he FROOZE only to quickly realize that a trip-wire was on top of his boots. Quickly all the others around him retreated carefully and then 2 special soldiers carefully dug into the ground around his boots and uncovered a ground mortar and followed the tip wire into the tree line. He was allowed to now move and retreat. His comment: YOU LIVED. One time in a wide-open field the Marines had to run fast and low as there were known snipers in the area. As he was running his boot was caught on a rabbit-snare, holding him in place, until he could detach it. No sniper. No underground ground mortar. Again, his comment:  YOU LIVED. Soldiers all carried a Bible in their upper left pocket, basically over their heart. Once during a mission there was incoming mortars and shrapnel was all around. Some Marines were hit and wounded. Skip was not. When he had a chance, he went to look at his Bible and discovered a piece of shrapnel went into the Bible. Again, his comment:  YOU LIVED. Rest & Recreation was offered all soldiers. Some were 3 days of “local” R&R and some were longer and out of the county. Skip was on a short 3-day R&R and when he returned, he learned most of his platoon was wiped out in a battle. Again, his comment:  YOU LIVED. At one conflict they needed to call in air-support for additional fire-power. Now you are experiencing bullets from in front of you and as the air-support arrives from above and behind you firing at the enemy in front of you, you quickly understand the meaning of “friendly fire.” Bullets are now coming at you from the front and back of you. Again, his comment:  YOU LIVED. In April 1968 at Camp Carroll a Marine died in a battle but his body was not able to be retuned with the rest of his company. Skip’s unit was assigned to bring the soldier back. Skip and 10 Marines were all wounded retrieving the body. 2 more died and Skip was himself wounded and received a Purple Heart and a Bronze Star as a result. But Skip related that he realized one time that God was in fact in the country with them. His squad was at the top of a hill when the leader called for quiet and pointed ahead. As they all carefully looked, it was not the enemy. It was in fact a 12-point buck standing there, in the midst of all this war and conflict. They could have easily shot it and taken it back to base camp for meals for many. But they didn’t: IT LIVED. As Skip closed his life-story in Viet Nam his final comments rang true for I’m sure many soldiers that were in those battles: It was a kill or be killed attitude. That I’m sure allowed him to make the comment: YOU LIVED!  All that many of us could say after his presentation was, Skip, THANK YOU FOR YOUR SERIVCE.