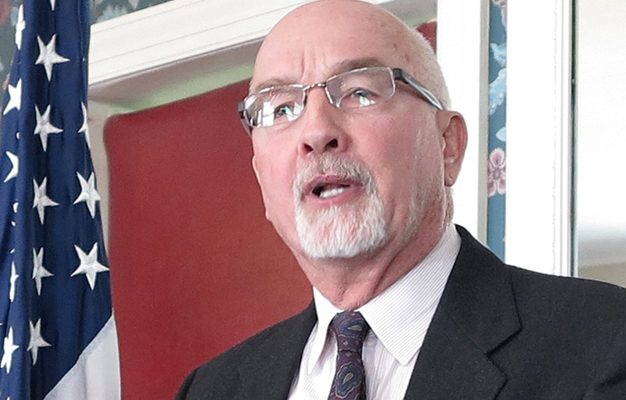 Dec 13 great turnout today. Remember next week, Dec 20th our meeting is an evening meeting for firefighter of the year award and its held at the Grand Eastonian. If you have not yet told Walt Howell you are coming please call and let him know NOW 610-258-4282: there is no luncheon meeting and the following week, Dec 29 we are not meeting. Today our visiting Kiwanian was Ed Deering from Ohio and Florida along with his daughter Kathy. BTW Ed will soon turn 95 in January. A reminder to Vic’s Ding-A-Lings to be at the Salvation Army Bell Ringing post this Sat. at Boscov’s East Side from noon-7PM. Foundation president Ken Wildrick called Vic Dennis to the podium and thanked Vic for the many years he was the Foundation secretary and then presented him with a small token of our thanks (restaurant gift certificate) for his many past years as the secretary.

Long-time Easton Suburban Kiwanis Club president Kevin Dolan, and friend to many of us, gave us a powerful message as Administrator of the Northampton County Children, Youth & Families Division. Kevin’s served in the County Dept. of Human Services for almost 44 years. He is founder of Turning Point the Domestic Violence Program for the Lehigh Valley. And Kevin’s an avid runner competing in 32 marathons including the 1996 Olympic Torch Relay Team. Kevin thanked our club for our activities especially our new Opioid Awareness Campaign: he thanked us for helping make a difference in peoples lives. Kevin read a story about a young man named Dave. He was abused by his football coach and the story describes what mental affect if had on Dave as he went through his early life. He began drinking at 14, didn’t go to college, married and had 2 children but could not really “father them.” It was more and more alcohol. He always felt shamed. He had nightly “visits of his worst fears.” Finally he decided to visit a counselor. He divorced, remarried for love and went to school and became a nurse. He would love to have back those 20 years of his life but he can’t. Kevin explained that his department in 2014 had 5000 investigations in Northampton County for abuse and so far in 2017 he has had over 7000 cases and his staff is only 128. His department investigates: child abuse; general protective services; permanent unit (find homes/houses for kids in trouble). High burnout rate and this year already he has had to replace 27 of his staff. He explained how the laws about child abuse began in 1874 in New York City. Since there were no laws on the books for children it took a wise person to utilize the A.S.P.C.A. laws to get the case heard and to save this little girl from further punishment. In PA as a result of the “Jerry Sandusky Laws” there are now 23 new laws on the books and one important one is anyone who is licensed for any type of business in PA is required to report anything they learn about any child that may be abused. Ken pointed out that it is no longer the “normal areas” of our community where drugs are found. Recently a drug lab was found in the backyard cabana of a $600K house in Bethlehem Township. And when children are involved, they have to be removed. He also explained about the “Termination Law” where tis year he has had to legally removed children from the parents—forever and place them hopefully with relatives. He read a great poem “The Eagle Who Thought He Was a Chicken”