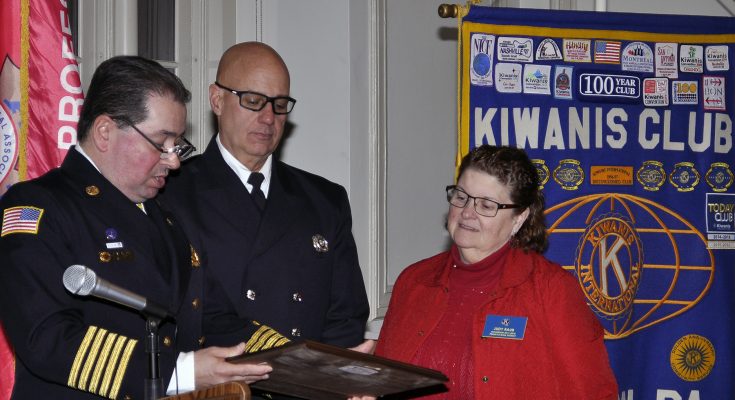 Dec 20 This week’s meeting was a special evening event to honor Easton’s Firefighter of the Year. President Bill called the meeting to order by asking Fire Chief Bast to ring the Kiwanis “Fire” bell. The fire department posted the colors, led us in the Pledge of Allegiance, and the chaplain of the department offered the prayer in an impressive opening ceremony. Pres. Bill asked for a moment of silence to honor the passing of Kiwanis member Paula Roland. He then introduced PA Kiwanis Governor Judy Raub and her husband, Bob. He then spoke about the Opioid Awareness program and Nick Ciambrone stated that the next committee meeting will be Jan. 8. The next public forum is set for February 5 at Shiloh Baptist Church. The meeting was then turned over to Walter Howell, chairman of the event. Walt gave a background of firefighting stating that it takes a strong body, mind and spirit to do what these brave people do. There are three types of firefighters; career, volunteer and a combination of the two. Then Chief Bast took the podium and he thanked the Grand Eastonian for their co-operation with the department. He spoke about the 1759 emergency calls the department took this past year and the 288 medical emergencies they were called to; the majority of them involved some type of drug use such as the opioid crisis that Kiwanis and other organizations are working to help alleviate. He stated that is has been 3 years since there has been a fatality in the city due to fire and the average response time is 4 min. 23 sec. thanks to the placement of the 3 fire stations. He spoke of the many varied charities that the department supports and then called up Jim Corcoran, the recipient of this year’s Firefight of the Year award which was presented by the chief and Kiwanis Gov. Judy Raub. Mayor Sal Panto expressed his pride in the department and the work that Jim has done to provide over 600 of the city’s children with warm winter coats. Jim and others were at a firefighters meeting where this program was presented and he brought it back to Easton and has been a driving force for the project. He thanked his wife and son, and the various local businesses as well as the other firefighters, for their support in the department’s efforts for the many charities they support. Dep. Chief Kevin Arnold then presented several other commendations to others in the department for their achievements. Kiwanis Gov. Judy Raub then closed the ceremony with a quote from Dr. Seuss: “To the world you may be one person; but to one person you may be the world.”

Firefighter of the year Jim then signed several books to be given by Kiwanis to children. The next Kiwanis meeting will be Wednesday, Jan. 3 where our speaker will be Jeff Finegan who will speak on how opioid deaths affect families.