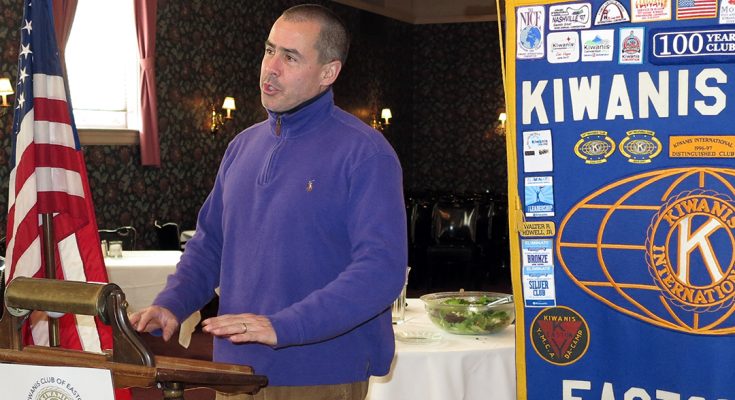 Welcome to a New Year at Easton Kiwanis; a very special year as we will be celebrating our club centennial. We had 18 members and our speaker in attendance today. Before starting the meeting Pres. Bill passed around specially designed key chains made for us by daughter Jennifer as a token of our 100th anniversary. There will be a Board meeting at 11am next week. Our new web page is up and running; check it out! Remember that the members only area is password protected! Walt gave a report on the next SLP meetings; Vic Dennis reported that $575 was collected by our “Ding-A-Lings” for the Salvation Army, the highest we’ve ever collected much thanks to Walt for bringing some of our SLP members who really gave it their all! Ken reported on our 100th anniversary celebration and asked that everyone go over the spread sheet he sent out and let him know if there is someone on that list that you can contact personally. James reported that he received great feedback from our last opioid awareness meeting at Easton Area Middle School. He even got a request from someone in Oklahoma asking for help in setting up a program there! There will be a planning meeting on Jan. 8 to prepare for the next public meeting to be held on Feb. 5 at the Shiloh Baptist Church. Then Skip introduced our speaker, Jeff Finnegan of Finnegan Funeral Homes, also a Palmer Kiwanian, who gave us some information on how the opioid epidemic is affecting the families and friends of those who for one reason or another could not fight their addiction.   Skip told the story of how when he was an Easton Police officer someone came up to him and credited him with saving his life by arresting him. Then Jeff began by applauding our efforts with our public awareness meetings. He stated that in his business it is now which deceased person is the overdose of the week. He pointed out the differences in the generations who attend the funerals of those who have passed, from great-grandparents on down to the friends of the deceased. Friends look into the casket, shake their heads, and then go out and do the same things. He also pointed out that in today’s society young girls think it is “cool” to date guys who are either in, or on their way to, jail.   There are also more infant deaths due to drug use by the mothers. This epidemic is an emotional and financial disaster for families, businesses, and the government as many victims do not have jobs but they “work” the system to get what they need for free. The information we help to get out at our public awareness meetings is important to make people aware of this crisis, and hopefully, help some to get the help they need.